SoKo and Passion in Politics

It's still a wonder to me that President Lee Myung-bak got elected in the first place, given how sharply his approval ratings plummeted as soon as he took office. The initial negative response was due to his decision to sign a trade deal with the United States, allowing the U.S. to export beef products from older cows to South Korea. The public became terrified of a Mad Cow Disease epidemic, staged mass protests all over the country (including one in my small town, right outside of my taekwondo studio just as I was coming out of practice...had anyone asked, I planned to say I was Canadian). 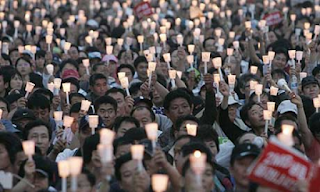 Looks like we're still seeing the fall-out from LMB's massively unpopular decisions, as opposition-party members are doing everything in their power - even taking physical action - to prevent other trade-agreement bills (among other issues) from going through.

I have my own opinions, positive and negative, about both sides of Korea's current political brouhaha. But for now all I'll say is this: it may be shocking as an American to see such things happening in a democratic system, but it's also refreshing. Imagine if politicians in this country were as willing to put themselves on the line for an issue that's deeply important to them and the country - say, for example, the Iraq war or gay marriage bans?
Posted by Anna at 3:30 PM