Pictures! From the end of Orientation

Sorry it's been so long since my last blog update. I really wanted to show you pictures of where I am and what I'm doing, but I was having camera problems. Basically, my new camera came without a cable to plug in the battery charger, and I couldn't even get my old pictures off my camera until I finally tracked a replacement cable down. But I'm back! And before I show you pictures of Hwasun, here are some that I had left from Orientation in Chuncheon.

Most of the time in Chuncheon, we ate in the cafeteria at Kangwon University. But here's a picture of a traditional Korean meal. It involves many, many side dishes, most of which are spicy, and everyone sharing from the same dishes. 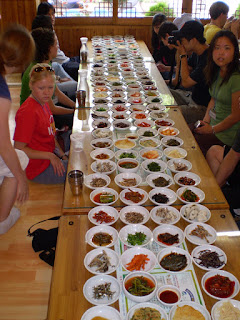 This picture is simple. I ate, therefore I'm happy. 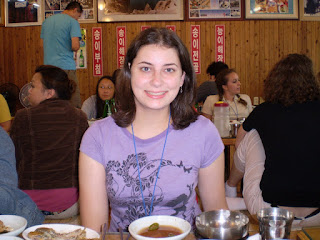 One weekend of Orientation we went to Songnisan, a mountain resort in central Korea. The exective director of Fulbright Korea billed it as a chance to relax and forget about the Korean language for a while. Here's a picture of the river from Songnisan, with the mountains in the background. It was gorgeous there. The fresh air did its job and purged my mind of all the Korean I knew. 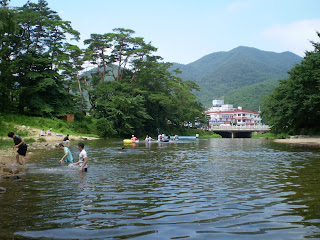 In Songnisan there's a Buddhist temple called Beopjusa. Beopjusa is famous for having one of the tallest statues of Buddha in Asia. It's amazing. 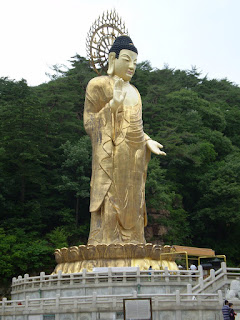 The entire temple are was very beautiful. It had this peaceful energy about it that's difficult to explain. But I think anyone who's been to a historical religious place, whether it be a church, a temple, or just a spiritual area, will have an idea of what I'm talking about. 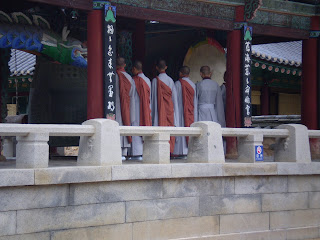 I haven't had the heart to look up what the Korean on this sign actually says. But in my mind, it says "Beware of squirrels," and I giggle and think of Grinnell. 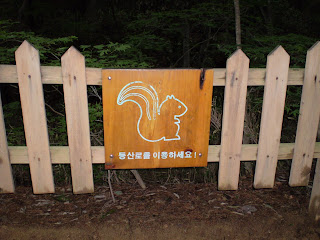 Actually, at one place I visited in Chuncheon, I saw Koreans taking pictures of a squirrel in a tree. Maybe squirrels are really rare in Korea? I haven't figured that one out yet.
While in Chuncheon, I had the chance to learn about Dado, the traditional Korea tea ceremony. I'm a dedicated tea drinker, so naturally I signed up immediately for this activity. It's a very beautiful, precise process, but I think its precision has an effect almost like meditation. I felt quite serene at calm by the end of the cereomny. Here's a picture of our teacher, followed by one of me trying not to spill hot water all over the place: 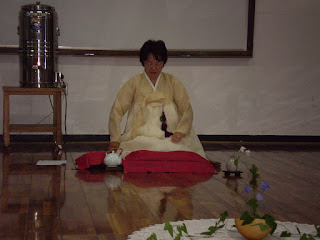 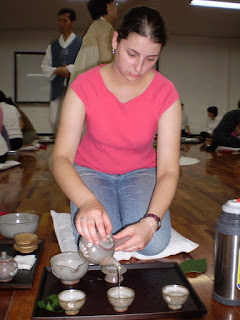 We drank green tea at the ceremony. It was goooood!
Those are all the pictures I wanted to show you for now. WIthin the next week: Hwasun! Students! Host family! My messy, messy room!
But before next time, I should tell you one more thing: I got a straight-perm for my hair. See, the weather in Korea so far has ranged from hot and humid (not good to my naturally-curly hair) or constant rain (even worse for my naturally-curly hair). So I made the difficult decision to get my hair straightened. Here's the "after": 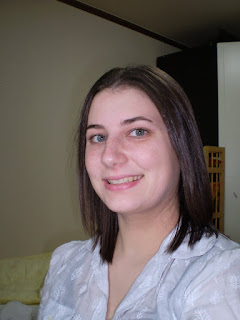 It will stay this way for about 5 months. It's very straight and very thin, and honestly, I prefer the volume my hair had before, which you can see in some of the previous pictures I posted. But it's definitely been easier to manage! I step out of the shower, give my hair a quick towel-dry, and one hour later it's dry, neat, and frizz-free!
Thanks for reading!
Posted by Anna at 3:32 PM