Yesterday was a national holiday in Korea, Chuseok (추석). One of the best parts about living with a host family is that I get to experience Korean culture firsthand, and yesterday I was lucky enough to celebrate Chuseok with my host family.
Chuseok is a day for honoring one's ancestors. The day before, on Monday, everybody makes rice cakes called ssongpyon (I really don't know if that's romanized correctly at all, so I apologize). You take the dough and fill it with sesame seeds, red beans, or other mixtures I didn't recognize, then fold the dough up like dumplings. Here are some of the bowls of ingredients: 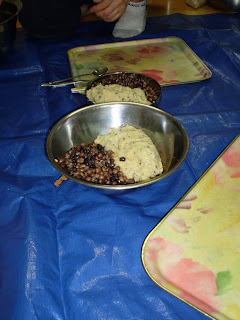 This picture's a shot of my host mother kneading the dough: 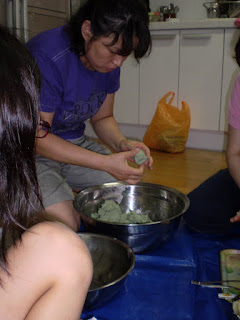 Here's the ssongpyon before it was cooked, and then after: 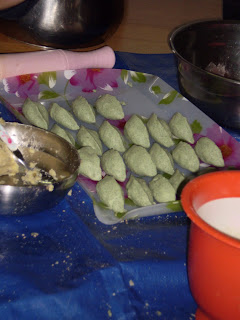 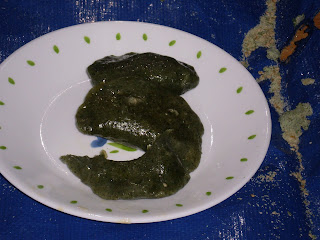 Tuesday was Chuseok itself, and we woke up veeerrry early to drive to Gochang, a nearby town, to see my host father's parents. I don't have any pictures from here on out, since I felt so grateful already just for being allowed to come along at all. Anyway, my host father's grandparents' house was filled with relatives (and a ton of adorable little kids). Once everybody was there, lots of food was set out on a table in the middle of the room, and the men stood in front of the table and bowed to it. This is the food that would later be placed on the graves of the family's ancestors. It's interesting to note that Chuseok is a holiday dating back to Confucianism, and part of the Confucian philosophy is a distinct separation of men and women. As a result, only men are allowed to participate in the rituals.

After the men bowed to the food (I wish a better way to put this, but I only have a limited knowledge of what was going on and don't want to say the wrong thing) we sat down to a big breakfast. We ate fish and the usual plethora of Korean side dishes. The men then spent the morning visiting the graves of their ancestors and leaving offerings of fruit while the women hung out at the house and the kids played.
We ate lunch at my host father's parents' house and returned home in the afternoon. A few hours later, we drove out to another town Boseong (which is famous for its green tea!) to eat dinner with my host mother's parents. Her parents live on a farm with a few cows, where they also grow red peppers and, I think, harvest rice. We ate Jahb Chae (again, forgive my poor attempt at romanization), a buckwheat noodle dish with veggies and meat. Once it was dark, we drove out to the middle of the rice paddies and lit off fireworks, mirroring Monday night, when huge fireworks were let off in Hwasun, like many towns in America do for the 4th of July. 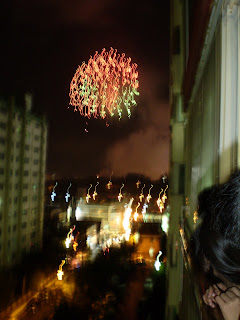 All in all, I really enjoyed spending time and bonding with my host family, not to mention getting three days off of work! But, I have to admit, it made me miss home just a little bit. It was wonderful meeting my host family's relatives and seeing how they spend their holidays, but I couldn't help thinking about Christmas at my grandparents' house, and that sort of thing. It really sneaks up on you - "This is just like how my family acts on the holidays! Oh...my family..." And driving out to the middle of the rice paddies, with only farm houses and mountains in the distance, naturally made me think of Iowa (except for the mountains). Much as I love cities, farmland has a great way of relaxing you.

Finally, it's cool to note that even though holidays like Thanksgiving and Chuseok are radically different, they're also very much the same. The family gets together, eats a lot, talks about everything. That's one thing I've notice a lot in Korea - everything is different, but so much is the same.
Posted by Anna at 7:55 PM