The trip over here went very well. There were two other girls from my program on the flight from Chicago to New York, and once we were in New York we found a huge group of people with the program. So we all sat around in a big circle and chatted until our flight took off at 1 a.m. EST.
Here I am, sitting and looking tired already in JFK: 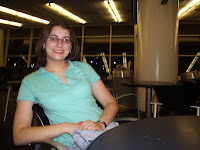 The flight from JFK to Incheon International Airport (just outside of Seoul) was long (15 hours) but pretty nice, aside from a few brief periods of turbulence. I watched the beginning of a Korean movie called Highway Star which, unfortunately, I didn't finish because we were about to land. While on the plane, I also had my first taste of Korean food. And everyone knows that the best way to be introduced to any new kind of cuisine is on an airplane.

Actually, the food I had (a dish called bibimbap, which is rice, veggies, meat, and red pepper paste that you mix together yourself) was good. I'm sure at some point I'll have "real" bibimbap that will put it to shame, but it was not a terrible first Korean meal. 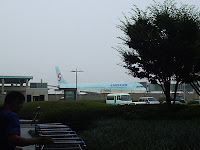 Once we finally landed in Incheon and I got through immigration/baggage claim/customs without a problem, all the Fulbrighters boarded buses to take us on a 2.5-hour ride to Chuncheon, a university town easte of Seoul. Surprisingly, the bus ride to Chuncheon wasn't bad either. I was tired and hungry, but they fed us (granola bars, cheese sticks, and potato chips) and I even slept a little. But! By far the best part of the bus ride over was actually the rest stop we took. It was a little restaurant off the side of the road that we stopped at just to use the bathroom. This is the view across the street (a great "wow, this really is Korea" picture): 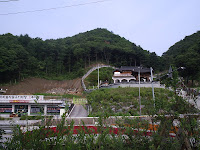 Now for what made it the best part - the view of the river the restaurant was on: 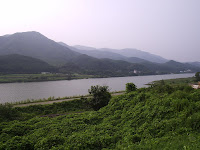 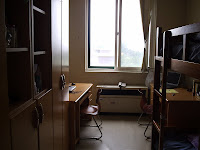 Anyway, we finally made it to Kangwon University in Chuncheon, where the orientation is being held. We immediately moved our stuff into the dorm rooms (I've become convinced that I will never actually leave dorms, no matter where I go or what I do). The rooms are pretty small - smaller than most doubles in America.

At this point, it was still only 11 a.m. Korea time. But that means 9 p.m. CST the day before, and that means I was distinctly jet-lagged. We ate lunch, did some more orientation-like stuff, and then at 8 p.m. I happily fell asleep for the night.
And as one final point of reference, here's the view of Chuncheon that I have from my dorm window: 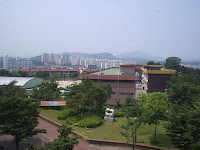 That's all for now. But leave comments! Email me! I'd love to hear from everyone!
Posted by Anna at 6:23 AM

Welcome to Korea.
Good luck with your year here and your blog.
I'm just about to leave...

Good luck with everything Anna!
I hope you keep posting photos.
-Julia

Great to see the photos!
Mom